The ‘waveform’ which comprises much of my work in this show was initially inspired by a flag iris seed found floating in my garden pond. I distilled the geometry, folding two identical, semi-circular ended rectangles of clay around each other and joining them edge to edge, realising an intriguing volume: 3 dimensions, 2 faces but only 1 edge.  By incrementally shortening the rectangles, the assembled forms become flatter until, at iteration 7, just a 2D circle would arise.

The ‘waveform’ touchstone is iteration 4 in the ‘Waveform transform’ set and, in groups set perpendicular to each other, they create an undulating ‘weave’ effect with which I create arrayed wall pieces. As singular pieces, they are very tactile ‘touchstone’ forms describing the void between clasped hands, their two sides echoing the Yin Yang symbol. All the waveform pieces here are high fired stoneware or porcelain. 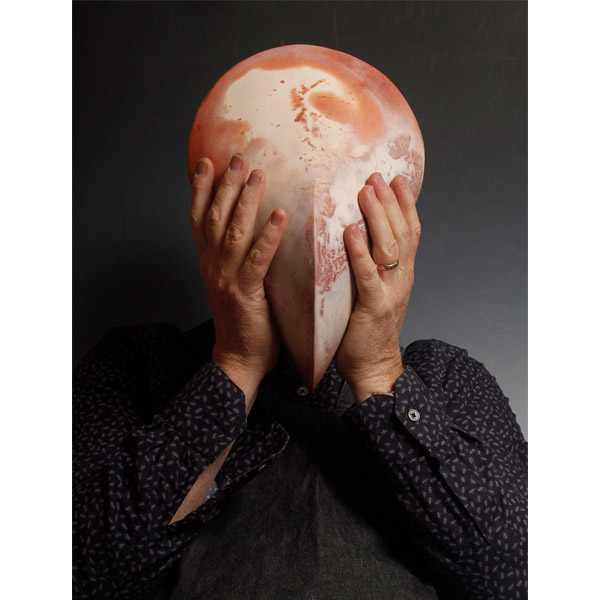 The other form represented here is the ‘mussel’ (oloid) which seems the opposite of the ‘waveform’: whilst still 3 dimensional, this has 2 edges and only 1 face. It could be considered a type of ‘sphericon’ in this respect and there is a subtle relationship between sphericon and waveform: draw a line around the single face of a sphericon and that line describes the shape of a waveform hidden within!  As with waveforms, the geometry of the oloid lends itself to a range of arraying opportunities and, again, single forms have irresistible tactility.

The mussels in stoneware crank, with an incised hatched pattern highlighted with coloured slip gifted by the flooding River Swale adjacent to my studio are suitable for year round garden display.