​A common theme throughout her work is documenting the ‘evidence of presence’ and human gesture. Most notably, she paints with silver.

​​Following a degree in Textile Design from Chelsea College of Arts, Becca was employed in London design studios and artist’s workshops. She assisted in the creation of immersive sculptural installations, furniture and bespoke artworks.

​An evening class in jewellery making equipped Becca with the skills to turn a passion into a practice and influenced a change in direction and scale.

​Since relocating to West Yorkshire, Becca launched her own jewellery business in 2018 and in 2019 was recognised by The National Association of Jewellers as an IJL KickStart winner and chosen as a finalist in The Professional Jeweller Awards for Young Jewellery Designer of the Year.

Becca continues to create all of her pieces by hand from her bijou home studio. 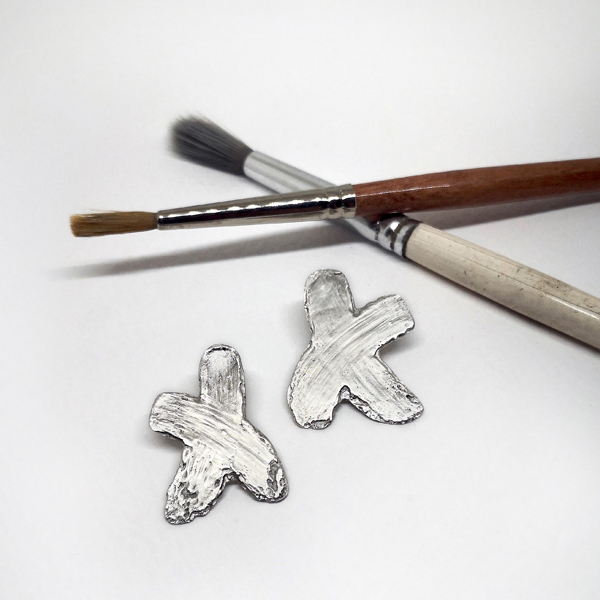 Precious Metal Clay or Silver Clay really excite me! Having had previous experience working with ceramics, paired with a real love for jewellery, when I heard of a material that behaves like clay but transforms into solid silver after firing it sounded magical and I just had to get my hands on some and have a play! My Brushstrokes jewellery collection soon took shape as a result. I am drawn to materials that change state. I am fascinated with documenting the evidence of presence and preserving a moment of movement, so materials that are worked with in a liquid state and later become solid, enable me to capture ephemeral shapes, textures, happenings.