Kristina Nenova moved to England from Bulgaria on 23rd August 2013 and immediately bought themself a green ring-bound folder for the large amount of official documents and letters that started accumulating, including correspondence from schools, doctors, local authorities and banks. Seven years later, they became eligible for British Citizenship through naturalisation and had to submit these documents as part of a very complex and expensive application process (the price of each shirt is the exact amount spent by the applicant on the application).

Eight of these documents have now been screen-printed onto calico and sewn into three shirts and two pairs of trousers.

Over time, the significance of the documents shifts; they start off as bureaucratical evidence and become a journal of collected memories. The act of wearing the shirts outside highlights different aspects of the citizenship application. On the city streets, attention is on sharing personal documents with anyone that might see them. When seen in a more rural setting, we realise how insignificant the documents are in the grand scheme of things and how ‘unnatural’ the whole process is. In private, the focus is on their significance to the applicant when they are alone. Are the documents ‘them’ or are they the documents? 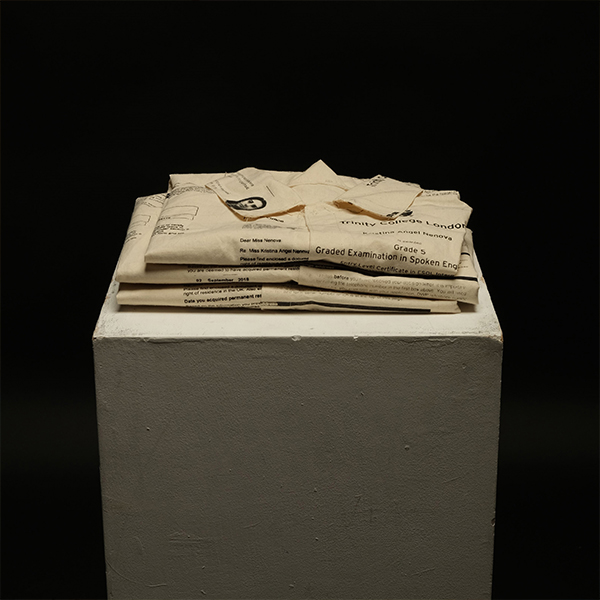 “The act of presenting the documents on clothing (as warmth, protection and style/social standing) and wearing them outside creates a dialogue around identity as curated through documentation. It is the act of having to share everything about yourself to become someone else, without any alternative.”