Lex Karpathios has been researching, writing, and creating art about the far-right since early 2020. They have since consolidated this into a studio practice informed by the values of autonomous anti-fascist organising. They address rising right-wing populism by exploring how far-right rhetoric codes itself into various online cultures. Karpathios takes particular interest in social media platforms like 4-chan and YouTube. The boundaries between different political and socially disenfranchised bodies often overlap here, offering a fertile breeding ground for far-right radicalisation. Through amateurish craft, Karpathios addresses the petty and inherently flawed basis that reactionary ideology is built upon. Their practice is explicitly anti-fascist, advocating for the broader abolition of oppressive economic, racial, patriarchal, heteronormative, and cisnormative structures that fascist rhetoric seeks to embolden.

Karpathios’ practice imitates the websites where the far-right communities congregate. Alt-lite, Alt-right, B, A, Start (2021) displays a phrase found on 4-chan’s politically incorrect forum - ‘but worst of all, they ruined video games.’ This text is an example of a dog whistle, coded language that masks political ideology whilst avoiding provoking opposition. The piece visualises the phrase by combining textiles and moving image. It remains unclear whether the coded language is manifesting into material reality or undergoing disentanglement.

Karpathios’ practice is principally a form of personal expression of their relationship to the far-right. As a trans artist, their work confronts feelings of futility and disempowerment that come with acknowledging the rising tide of right-wing populism and the personal threat it poses to them. They offer no solutions to this, focusing their creative energy instead toward making art that denies reactionaries the authority or creditability they desire. Alt-lite, Alt-right, B, A, Start’s coded meaning is explored through the moving image, shifting and changing to implicate the meaning of its underlying message.

Karpathios presents this text whilst ultimately indifferent to its sincerity. Their focus is to mock the pathetic grounds that the radical right builds their politics upon, immortalising throwaway language through craft. 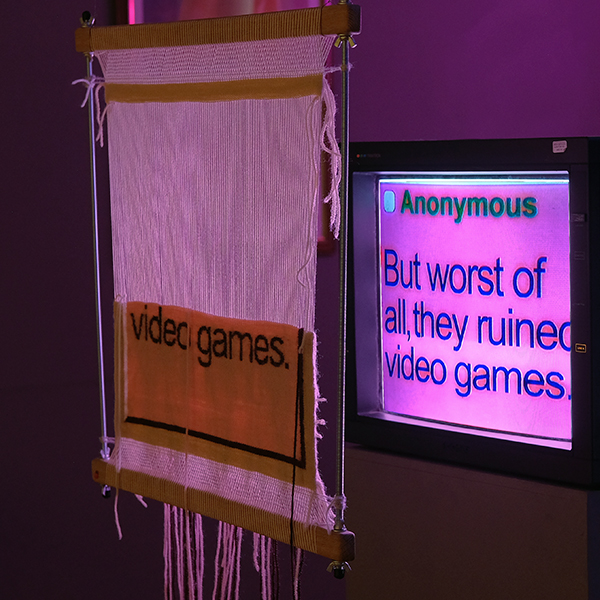 “I believe art cannot substitute other forms of organising and direct action against the far-right. In rejecting that goal, I afford my practice the freedom to laugh at the radical right and deny them power in doing so. ”