Lucy Hutchings paints large oil paintings of uncanny figures that explore the theory of recognition. She makes nude figures awkwardly present themselves in unnatural positions, interacting with each other at undisclosed dinner parties.

She captures the chaotic and messy scenes of a dinner party throughout her body of work, dinner tables covered in half empty glasses of wine as well as plates of cheese-fondue and salad. Spilt red wine and filled ash trays indicate the level of intoxication of the clumsy figures, using the table as a support and flailing their limbs in an overenthusiastic manner. Majority of the audience will sense the amusing relatability of being intoxicated at a dinner party, recognising the narrative and being able to see yourself drinking a glass of wine in the painting.

Besides this comedic connection is an apprehensive understanding of who and what the figures are,  creating an environment that is familiar and unfamiliar at the same time. She simplifies the facial features to make the expressions limited to the moving body language, which appears caught off guard and as if the audience interrupts something they were not supposed to see.

In between the bright 70’s yellows and cold tones throughout the painting are markings of brown oil stick, which she deliberately keeps exposed. She takes advantage of the exposed white canvas to create highlights of the wine glasses and also leave empty features of the body. This familiar but unrecognisable setting provides the framework Lucy wants to engage the audience in an intriguing and humorous environment. 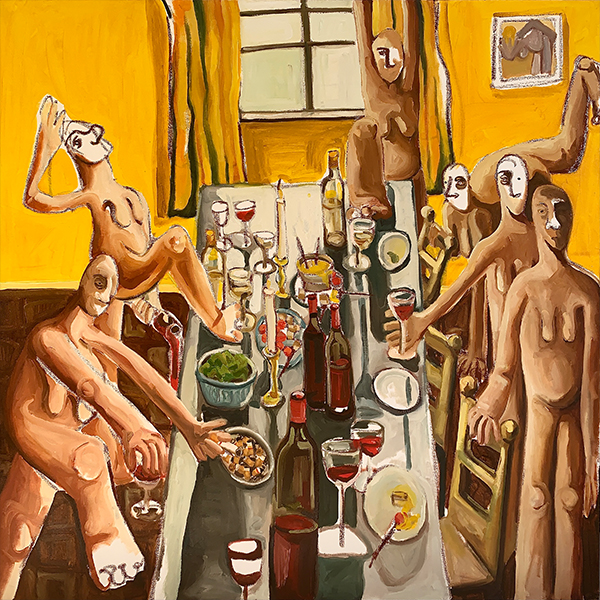 “I want the audience to see the process of my paintings and the balance of playful and premeditated markings, from the blank canvas to the fluid motion of the oil paint.”