Joshua Pell is an artist and illustrator from Hull, based in Leeds. He studied Illustration BA at Cambridge School of Art from 2014 – 2017. He employs a range of techniques to create bold imagery that often plays on limited colour and white space.

Observational drawing is his constant practice. His sketchbooks are a visual diary that exist within the confines of the city, where his choice of subject matter can be attributed to his working-class childhood.

What had started as a necessity to maintain and develop drawing skills for illustration work has become a fluctuating project spanning years of documentation.

This project follows the Lady Beck – which is also known as Adel, Meanwood and Sheepscar Beck. His chosen locations describe a linear narrative of social and industrial change in Leeds. Much the same as any post-industrial northern city. Starting at the 7 Arches in Scotland Wood, we pass through Stone Mill Court in Meanwood. A converted 19th century mill and the site of a medieval water mill. We then see a view of Meanwood Valley from Sugarwell Hill, describing a transition from post-industrial luxury to the urban plane of Sheepscar. The waterway seems redundant, and from here serves mainly as a canvas for graffiti artists until it passes underneath the city. It then reappears only sporadically through Mabgate, where in the distance we see tall student hall developments, and where the beck finally disappears underground for good. 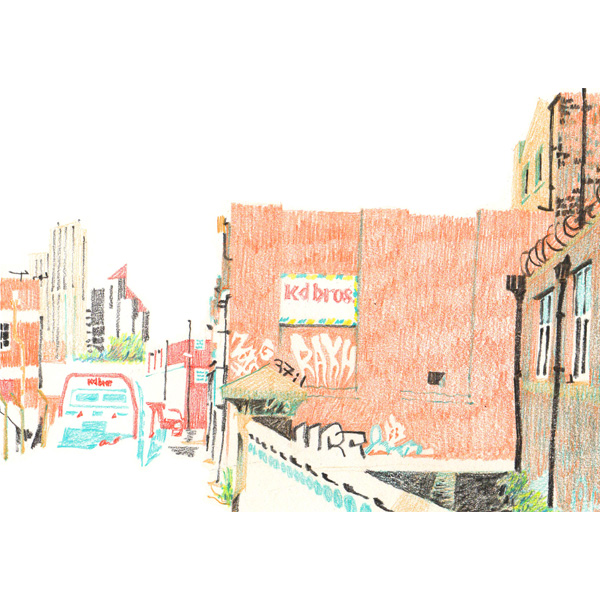