JJ Eteson’s work is an emotional response to his felt experience in the more remote areas of the moors, mountains, and forests of Yorkshire, where the landscape and weather conditions combine to create natural drama.

Eteson has always possessed a keen interest in historic folk customs and traditions. This passion for history can be keenly felt in his series of small-scale figurative sculptures, which portray the forgotten landscape of distinctive regional trends and movements.  Eteson often uses various materials to bring contrast to the work; traditional bronze, cold cast iron, and digital sculpture are often used together, drawing inspiration from the raw energy of nature in the wilds of Yorkshire. Whereas his patinas, laid heavy over the sculptures, are clearly the preferred choice to capture a more aged appearance, creating a moody atmosphere of the lost and forgotten. He is currently exploring patterns within the zeitgeist of certain populations, the acts, and beliefs of the past are forgotten but still remembered through customs or sights such as the megaliths used to create the base form of these works.  This series of small-scale bronze sculptures are personifications of the standing stones and neolithic monuments of Yorkshire and surrounding counties. The monuments themselves have been captured with a form of 3D scanning known as photogrammetry, approximately 170 images of each megalith are fed into a program to create a digital model. The same process was then used with human models, focusing the scan on small areas of the body; their expressions and poses were then paired with stones that possessed similar mannerisms. Then to contrast the grand nature of the source material, the forms where then printed to a small scale, their details visible only with careful observation.

The name of the series mirrors this need for careful observation, “At Skimt” roughly translates from Old Yorkshire Folk talk to the act of squinting to examine something small. Whilst the second part of their names, relating to their numerical order, draws its origins from the ancient counting methods of shepherds, who flocks now graze under these old and forgotten standing stones. 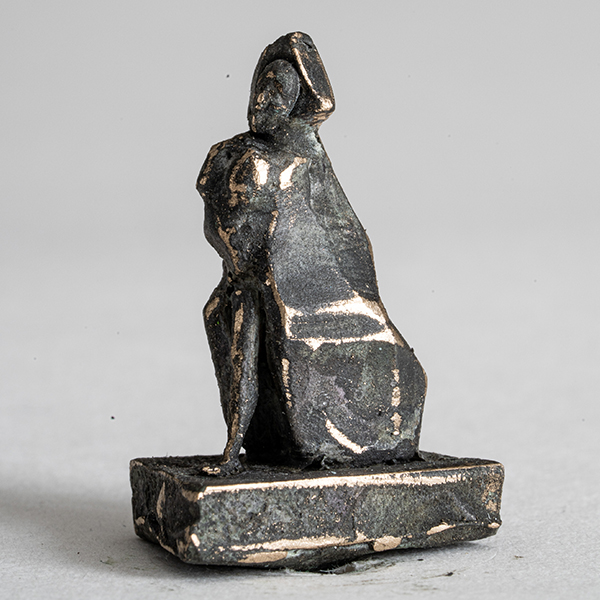 “The elements of the weird and eerie are distinctive characteristics within my work.”