The 1970’s: what were we wearing and what was the mill making.

The 1970’s are often looked back on as a time of misery in comparison to the swinging sixties.  There were many hardships including the miner strikes and oil crisis but life carried on for families.  By the end of the 1970’s families were beginning to have extra money.  Perhaps spent on the likes of curly wurlys and space hoppers. Men’s fashion really revolved around the suit, with the biggest variables being the fabric and the cut of the suit.

Looking through the mills collections of fabric from the 1970’s.   There were lots of fabrics which most would consider a standard suit fabric. Pictured bellow are swatches from 1971 and 1972.  A herringbone fabric and a brushed marl.  They show the use of cool blue tones as well as warmer earthy brown tones. 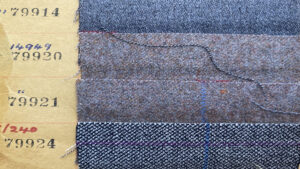 There is some much more exciting fabrics in the collection, with colourful checks and hounds’ tooth from 1971 and 1972. 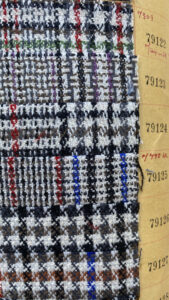 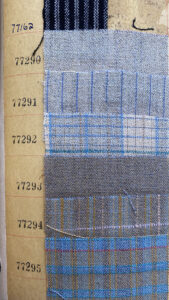 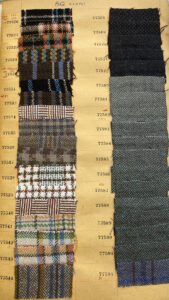 I also discovered a lot of fabrics with interesting small patterns.  The images below show swatches from 1976 and 1972. 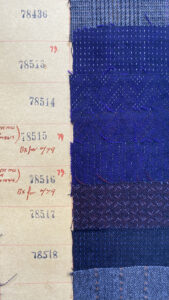 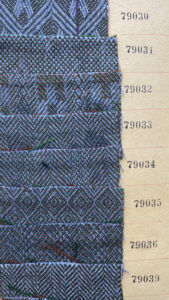 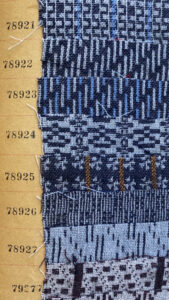 Suit fashion of the era included suits such as the lounge suit with large lapels, and the sports suits in popular herringbone tweed.  There are many examples in the mill’s Archive collection.

Suits were worn daily from picket lines to pop stars. The fashion that interests me the most is part of the punk movement, rejecting every rule of fashion. The classic suit was manipulated time after time, particularly the suit jacket. Johnny Rotten often wore mismatched with ripped jeans punk accessories and the odd safety pin thrown in for good measure.

Blog post written by Kirstie Payne, Placement student from the University of Leeds