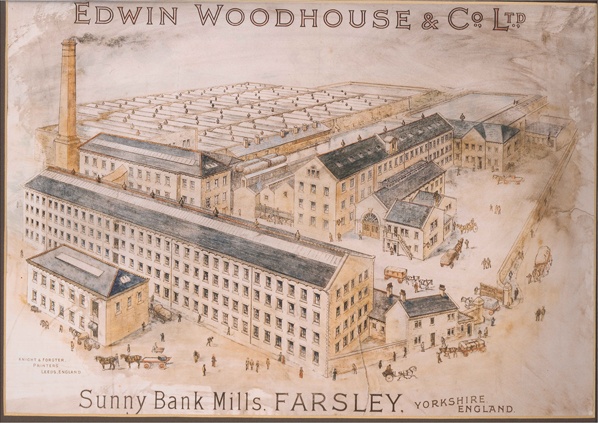 “A Noble Effort” – this was how the ‘Pudsey & Stanningley News’ in 1914, described the work of Clorinda Woodhouse, daughter of Edwin and Charlotte, in organising the provision of clothing and other comforts for soldiers serving at the front during WW1. Clorinda was the daughter of Edwin Woodhouse the founding owner of Sunny Bank Mills establishing Edwin Woodhouse and Co Limited in 1895. The provision of clothing was nothing new to Clorinda; the West Riding Needlework Guild, of which she was Honorary Secretary for many years, had been making clothes for an annual distribution to the poor of the district for some time. Along with meeting this need, the Guild also took on making items which made life in the trenches more bearable. Each Wednesday afternoon, Clorinda would get together with about forty ladies at ‘Brookleigh’, the home of Edwin Woodhouse in Calverley. Materials were provided from her own resources and the items started at her home, accompanied by tea, and then finished off in the Guild member’s homes. This venture was very successful and Clorinda, with her team of workers, were able to send a significant number of items to the Red Cross Society’s headquarters in London. These items included 46 nightshirts, 83 day shirts and 22 bed jackets, as well as numerous pairs of socks, bandages and hot water bottle cases. Edwin, who was very interested in his daughters work, in turn contributed 100 packets of tobacco, a quantity of cigarettes and three “excellent cavalry saddles with all furnishings”. Many other items that were sent to the Red Cross are listed in the newspaper article. Sadly, the weekly meetings ceased due to organisational difficulties, but Clorinda carried on the work by providing wool to “good knitters” in order to make socks, scarves, etc. She also became the contact for the War Hospital Supply Depot for Calverley. A noble effort, indeed. References:   Pudsey and Stanningley News, October 2nd 1914 www.scarletfinders.co.uk – War Hospital Supply Depots/Yorkshire By Jim Humphries volunteer at Sunny Bank Mills Archive