Why was the cloth at Sunny Bank Mills called Edwin Woodhouse? 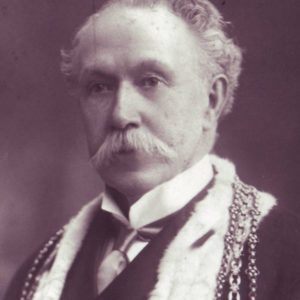 Edwin Woodhouse was a Halifax man who had come to Leeds ten years previously and bought the smaller Prospect Mill on Wade Street in Farsley (Later known as Belle Vue Mill).  He immediately renamed the business after himself and set about an ambitious expansion programme.  He introduced fine worsteds to Farsley and greatly expanded the mills.  By 1884 he had built a vast new Spinning Mill on the land he purchased to the south of the existing Mills.

He lived for some time at the now-demolished Stanningley Hall.  Then moved to his beloved Brookleigh in Calverley originally built by Thomas Hollings Gray in the 1870s.  He became a prominent figure in Victorian Leeds; he was mayor of Leeds twice, the longstanding chairman of the Licensing Bench, and became a Justice of the Peace. 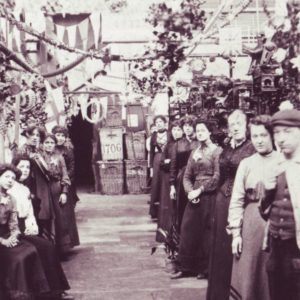 Image from the Archive collection of workers at the mill.  The decorated mill and photographs were taken to celebrate Edwin Woodhouse as Mayor of Leeds.

He had offices on King Street in Leeds.  His marriage to Charlotte Thompson produced three daughters Emeline, Clorinda, and Florence. 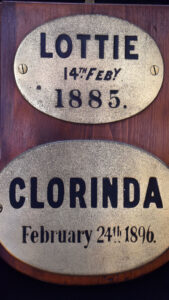 Image of two plaques in the  Archive collection which Edwin Woodhouse had placed on engines in the mill.  Celebrating his wife and daughter Clorinda.

In 1895 Edwin Woodhouse & Co Limited was formed.  Edwin Woodhouse still had a controlling interest in the firm.  Expansion continued, reflecting the increasing sophistication of the trade and the quality of the cloth produced by the workers. 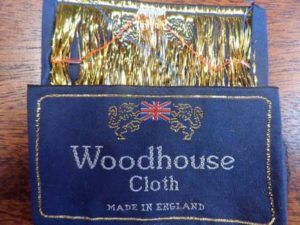 Image of Woodhouse cloth label from the Archive collection.

The branding was well respected and so subsequent mill owners continued with the Edwin Woodhouse brand name.

Back To Blog Next (Mechanics and pressure gauges) Prev (Thobes)