Exterior of the Royal Army Clothing Department, Swinegate Depot, Leeds, 1918 – © IWM (Q 28650) www.iwm.org.uk/collections/item/object/205288964 On Thursday 7th January 1915, an article appeared in the ‘Yorkshire Post’ regarding the new Army Clothing Depot which had opened in Swinegate, Leeds, close to the then Midland Railway station. The impressive building in which it was housed, was originally the Tramways Depot, and was taken over by the War Office, who adapted it for the “handling of pieces of khaki cloth and uniforms”. As the war progressed beyond “Christmas”, the demand for khaki cloth was very high and improvement in both the organisation and volume of output of uniforms was badly needed. Previously, cloth produced in northern mills was sent, by rail, to the Central Army Clothing Depot in London. Once checked and tested, it was sent back to Yorkshire for making up, which resulted in a significant delay in the production of uniforms. The new Leeds depot, which had about 150 staff, enabled cloth to be processed locally, thereby providing a great saving of time in getting the tested cloth to the clothing contractors. The initiative was welcomed by manufacturers and clothing contractors, who as a result, did not have to travel to London for meetings, especially of benefit to Scottish contractors. The War Office also benefitted in that more uniforms were available at a faster rate of production. In 1918, the depot was visited by King George V and Queen Mary as part of a three day tour of Yorkshire. During the tour they were shown some of the “millions of khaki garments” which were piled high. Some of the cloth used to make these uniforms was produced by Edwin Woodhouse & Co. Ltd in Farsley. The building, which became known as the Queens Hall, was demolished in 1989. 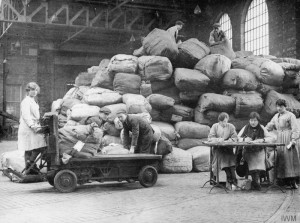