The archive volunteers have been working on preserving Mr Bell’s patterns, a collection of bundles of fabric samples from various sources used to inspire new designs at the mill (see the previous post). Many of the bundles were labelled with dates, going back to the 1840s, from which we are able to glean a sense of the social history and fashion during these times. Looking at the samples, one trend, in particular, seemed to stand out: in bundles dated from the late- 1850s to the 1870s, the patterned fabrics were dominated with bright purple colours. 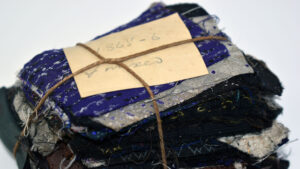 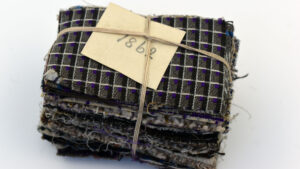 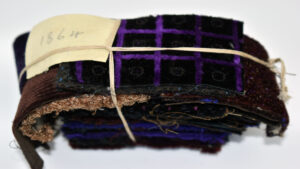 This is a brilliant visual depiction of so-called “mauve madness” (also known as “mauve mania” or “mauve measles”, take your pick!), referring to the boom in the use of the colour purple following the invention of synthetic dyes by William Henry Perkin in 1856.

Prior to the invention of synthetic dyes, purple hues were achieved with difficulty by natural dyes, and therefore hugely expensive. Tyrian purple, for example, was made from the mucus of one particular sea snail.

Perkin discovered what is generally accepted as the world’s first synthetic textile dye, Mauveine, by accident whilst trying to invent a treatment for malaria. One of his “failed” experiments with the salt Aniline resulted in a bright purple solution, which he soon found could easily dye silk. Realising the commercial value of this, Perkin quickly set up a factory to produce more dye.

The strikingly modern hue quickly grew in popularity, especially when Empress Eugenie of France stepped out in Mauve in 1857, followed by Queen Victoria, who wore a Mauveine-dyed gown in 1858 to her daughter’s wedding. These high-profile outings triggered the spread of “mauve madness” across Europe and America in the 1860s. 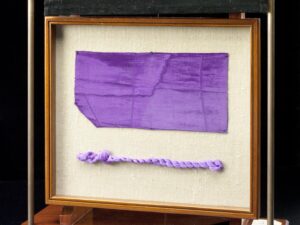 We can see in the fabrics collected by Mr Bell from around this time that the purple trend was very widely adopted, as the cheaper synthetic dye brought previously unachievable and unaffordable hues to the masses. Perkins’ discovery had also opened a gateway to the discovery of many more synthetic dyes, and the craze for mauveine began to die down as more colours became available, such as Britannia Violet, Perkin’s Green, and Martius Yellow. Within 50 years from the arrival of Mauveine, 90% of dyes used were synthetic rather than natural.

These bright little cloth bundles of Mr Bell’s can give us a sense of the excitement caused by this new age of textile dyes, and a fun, colourful perspective on an age that we might normally imagine in sepia.