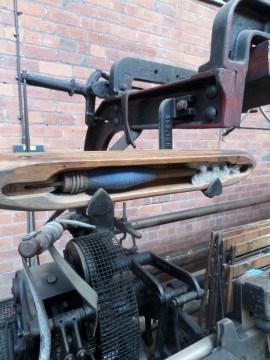 The loom in Sunny Bank Mills Archive dates from the 1950’s a Hattersley Standard Loom and was still weaving cloth up until 2008.  The standard loom was developed in 1921 and Sunny Bank Mills also had Hattersley warping machines.  The story however of the Hattersley loom and the people that developed the power loom is a fascinating and important part to the industrial revolution. This important invention is part of West Yorkshire’s history and the Hattersley family and Keighley. Richard Hattersley set up his own business manufacturing nuts and bolts at Stubbings Mill, Airworth. The business expanded and diversified into manufacturing spindles and rollers moving to more spacious premises in Keighley. Richard’s son George Hattersley took over the business and in 1834 he was asked to build a power loom for weaving worsted cloth. Up until this point it was generally accepted that good worsted cloth could only be produced on hand looms. George Hattersley was however to prove them wrong and created the first worsted power loom. 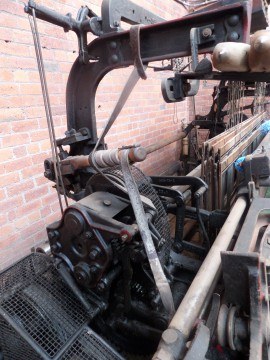 The original power loom however met its end at Nab Wood near Shipley. En route to Hattersley’s first customer of the power loom in Bradford it was smashed by a group of ‘Luddites’’. This group were revolutionary hand loom weavers fearful for their future livelihood. This setback did not deter George Hattersley and the company soon manufactured a replacement and successfully delivered the power loom. The company went into full time production of their revolutionary looms developing a vast diversity of looms. These included the development of the ‘Dobby’ a device which allowed weaving of much more intricate patterns. The also developed the world’s first small ware (or narrow fabric) loom. This venture was a great success working around the clock during the First World War producing tapes, metal ribbons and webbings for the service. 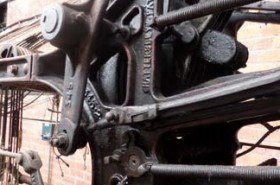 In 1921 the Hattersley Standard Loom designed and built by the company was to sell in its thousands. Success continued when rayon (manmade silk) was invented at Silsden, near Keighley. The area became recognised as the centre for rayon manufacturing industry with all companies in the area using the specially developed Hattersley Silk Loom. Success continued for George Hattersley & Sons until the 1960’s and so the loom at Sunny Bank Mills represents the end of the companies dominance in the development of the power loom.