I am awake earlier than normal.  Work starts at seven thirty am till five fifteen pm Monday to Friday and seven o’clock till eleven o’clock Saturday mornings.  Today is my first day at work since I left school a fortnight ago. I know the Mill.  I have been inside to the Winding Room that my mother works in, and we did a tour of the Mill about a year ago as part of a school project.  I remembered we started at the bottom of the Yard in the Carding and Combing.  Dust seemed to be floating everywhere from the machines which was an assault on our young ears.  The machines moved back and forth with sharp pins on pads pulling and combing the raw wool into one direction and leaving it in fluffy coils ready for the Spinning Shed.

I think we were relieved to breath fresh air as we did so gulping.  The Spinning was cleaner and quite fascinating as the wool was drawn and spun into thread on the hundreds of spindles.  When full they would be moved to the Cone Winding, ready for the Warping or to the Weaving Shed to be inserted into the wooden shuttles.  Which is where we headed next to stand at the ends of the looms and watch them flying across the warps at lightening speed, and the picking stick shooting to and fro, again ear shattering noise.  Weavers communicating by lip reading, a voice was lost in all these Sheds where heavy machinery was needed for production, so lip reading was important for communication.  Unfortunately the downside was many workers suffered with deafness, but some wore ear plugs to counteract it.

Next we walked past the Wash House to see the long lined (were they lead or zinc?) deep baths where the cloth was laid and washed to remove lanolin and grease before going to the Tentering where it was stretched out and dried.  The teacher then took us to the Mending Department were we each had to stand with a Mender and watch the process.  Ethel asked me would I like to work there, I said No!  I was going to work in confectionary.  I loved baking bread, cakes and fancies and wanted to learn more about Royal Icing.  But life doesn’t always give you what you want.  The school leaving age went up to fourteen to fifteen years and we were left kicking our heels for most of our last twelve months.  We had no extra teachers to take lessons with the kids who now seemed like spare parts.

Luckily it was a good summer and we spent a lot of time chatting in the school yard, sewing and knitting between odd lessons. Mrs Kevin took our class mostly, she was haughty and had her pets also those who could do no right.  She would sit on a high stool in front of class, her long legs crossed with high heels, brown hair in a long roll round her head, slim well dressed and with a plum in her mouth when she spoke.  she liked to get the lads going and would put us down with words ‘You useless lot will finish up in the Mill’ Turned out she was right, tho I wouldn’t class myself as useless.  I couldn’t get a job in confectionary, it was male dominated and no facilities could be made for a female.  So a fortnight after leaving Wesley Street school in nineteen forty nine I was up early with my mum but not really ready to start my first day at the Mill, I was too apprehensive. Walking to work at that time of morning we seemed to join half the population of Farsley all making the downward walk to the Mills and foundries.  Some were on bikes, some came on the Farsley Flyer.  A single decker bus with wooden slat seats but most people walked in those days.

Like an army, men mostly wore the same attire.  Navy blue overalls or bib and brace, today they would be called dungarees and worn as a fashionable item.  In those days they were the work clothes of thousands of men, along with their hob nailed boots.  Many of which were soled and heeled on an iron last with the remnants of old discarded leather belts from the Mill.  We were in the aftermath of war and among other shortages leather was one of them.  My granddad worked at Newley for the B.D.A and cobbled all our foot ware from such.  His knife worn curved with the cutting of belts width. Women wore pinafores, either wrap round or over the head mostly in black.  You might be called flighty if you wore a bright colour, and some ware turbans to keep the dust and fluff away from their hair.  So this constant stream of workers made this journey six days a week and I had just joined them.  Mum and I parted at the Mill gate she towards the tower, I up the Yard.  Cobbles underfoot, past the Main Office, Mill Office, Spinning Shed, Weaving Shed towards the Pattern Room.  Turn right open a door to a single flight of wooden steps, into a square Perching area at the top, turn right again and into the Mending Department.  To my left, a big wooden desk and Albert my boss waiting to take me to my place.

Three long rows of Burling Tables stretched down the room, and what seemed to me all had an old face peering at me over the top of them. The floor was a lovely wooden shiny parquet herring bone style, I noticed as my eyes dropped in embarrassment.  The walls a pale restful green and large high windows stretched the length of the room.  On the left hand side a very pleasant room, and quiet.  No clanging banging or wheels turning.  Only the sound of a sewing machine in the Perching area and the clang of the metal lift bringing the pieces up from below. So, I followed my boss down the aisle to the bottom of the room, heads turning to watch made me uncomfortable and it was a relief to reach my place at last and find faces I knew from school.  Like me they were here for the first time and some who were already well on the way up the Mending ladder.  There was about ten of us in ‘The School’ at that time.

We were left with a warning to ‘Keep Quiet’.  There was a double door to our left, as we were now facing up the room.  We heard steps being taken slowly and measuredly.  The door opened and a thin middle aged lady stepped through, hair parted at the side with deep waves and a tight little sausage like row of curls at the bottom.  Black overall, green jumper beneath.  No make up of course as you must not get anything such like on the material.  So she was quite sallow skinned and of a stern nature.  We were introduced and the learning began. 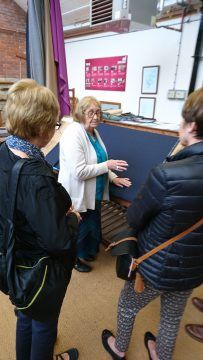