Edwin Woodhouse had no son to inherit the business and there is evidence that he was increasingly frustrated by the influence of other shareholders in the business.  In 1912 immediately on completion of a new grand, four-story Spinning Mill he decided to sell his controlling interest to Mr. John Harry Ives and his three brothers of James Ives & Company Limited based in Yeadon.

James Ives & Company Limited was established in 1848 and was a prosperous woollen manufacturer based at Leafield Mill and Manor Mill in Yeadon.  John Harry Ives was the son of the founder James Ives and lived at Leafield House, Yeadon.

The Ives only ran the company for five years but this period was heavily affected by the First World War.  The Mill produced large orders of khaki cloth, as did many Mills in the area.  At the beginning of the Great War, a War Office department was set up in the Great Northern Hotel in Bradford.  John Harry Ives was appointed head of The Raw Wool and Woollen Cloth section.

In this capacity, he had the task of placing large Government contracts of clothing for the Forces given out from the Bradford office and then distributed to the mills in the district.  Receiving their share of Government orders, James Ives & Company organised for wartime production. The records at this time for khaki production at Sunny Bank Mills are recorded in the Guard books and spanned many books and orders for khaki cloth during the First World War 1914-1918. 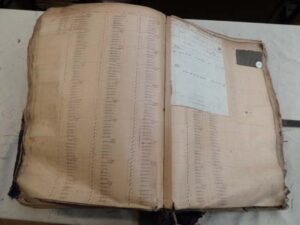 Back To Blog Next (The year that was 2020) Prev (Michael Whitaker, site manager at Sunny Bank Mills, retires on 24th December 2020.)