Mike Moor is a printmaker and painter living and working in West Yorkshire. Born 1966 in Stockport, Mike studied in Grimsby and at the Cheltenham School of Art where he specialised in painting and printmaking; he subsequently gained a Master of Arts Degree at Bretton Hall College.

Having travelled widely, Mike now lives in Otley, West Yorkshire with his wife. His art reflects an appreciation of printmaking history and of humanists such as Goya, Redon and Arthur Boyd. He is known for his mysterious, humanist and sometimes darkly comic work.

The ‘City Fragments’ etchings are part of a narrative set of 9 prints inspired by sculptures and statues in the centre of Leeds. The statues depicted carry the human drama but are also homages to the sculptors’ skill and vision.

The story is a loose one and tries to link two themes: the possible effect of city development on marginalised people, and the positive aspects of city life in accommodating difference.

The idea was to link these themes with Moor’s admiration of the city’s statuary, animating them in the early pieces to create a sense of fracas and uprising, and in the later scenes, an exodus from the city in search of a place of belonging. Moor admits that his political logic got lost while putting together the suite and in the end, he simply enjoyed depicting the motley troupe and flying a flag for the city.

About the artwork featured in the exhibition:

Disquiet in the Civic Hall:

I’ve always admired Leeds Civic Hall which when the skies are brooding stands out like a bright white cliff, lifting the spirits with its audacious golden clocks, owls and stone statues. In this scene the owl is still and calm (the wise observer, neither judging or commenting) while the putto and swan are in a state of conflict. To these I introduced two bronze sculptures from the Henry Moore Collection, Gaudier-Brzeska’s ‘Wrestler’ and Meadows’ ‘Startled Bird’ which added to the atmosphere of hubbub.

Statues Are Being Toppled Off Their Pedestals:

Circe and the Boars stand centre stage of an appropriately rainy Leeds which is beginning to flood and cover one of the owl statues which has been knocked off its pedestal (a wry warning to those who perhaps stand proud and smug). In this compressed scene the Civic Hall stands to the right of the Corn Exchange with the city’s emblematic fleece being hoisted by a crane, the seemingly permanent sentinels of the city.

Scene From the Vaults:

I was awestruck on first experiencing the gothic imagination at play in the grand staircase of Leeds City Library. Its arches, vaulted ceilings and carvings of lions and macabre skeletal dogs clinging to the stone banisters are unexpected after the refined exterior. They brought to mind Piranesi’s ‘Imaginary Prisons’ etchings which I included as a backdrop to both scenes which incorporate two carvings.

In ‘The Gothic Vaults’, cut-outs were placed on the metal plate to create the stark white crows. I like the charged atmosphere of this night scene which despite the sense of vast space, feels subterranean.

The etchings have all been drawn, scored and printed in Moor’s home studio and are either one-offs (Artists Proof written on the prints as A/P) or part of small editions (eg 1/10). 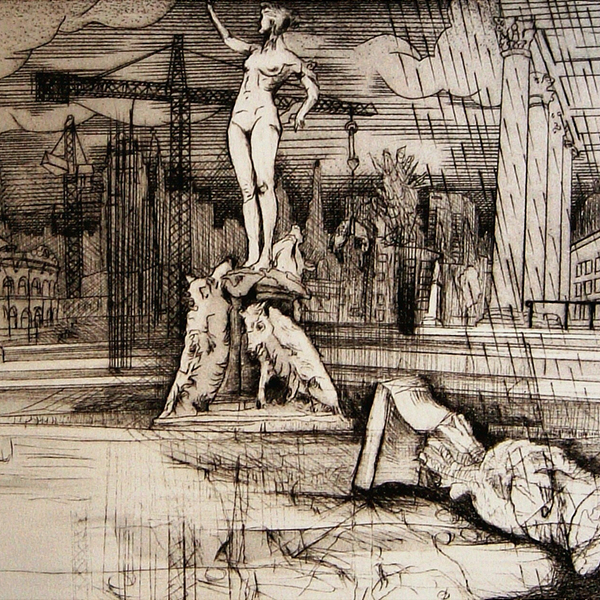 Copies of two of the etchings have been acquired by Leeds City Art Gallery, and can be borrowed from their Picture Lending Scheme. ‘The Gothic Vaults’ will also be shown on the Bradford Big Screen in the city centre throughout January and February 2022